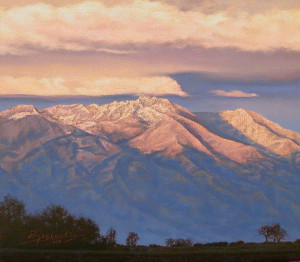 Colorado Creative Industries has acquired public art through direct purchase of existing artwork for Trinidad State Junior College’s (TSJC) Valley Campus, located in Alamosa, Colorado, in conjunction with the project to update their main campus building. Colorado Art in Public Places Program requires one-percent of capital construction funds for new or renovated state buildings be set aside for the acquisition of works of art at the project site.

“Early Snow on Mt. Blanca” is one of the pieces acquired by this program. This painting depicts a familiar sign of winter in the San Luis Valley and is one that is close to my heart as an all-time favorite piece. The sun sets in the west while Mt. Blanca is briefly coated in pink to red hues. It is the prominent view walking or driving toward my home. I am happy that this painting will remain in the San Luis Valley.

The mountain is considered to be the eastern boundary of the Dinetah, the traditional Navajo homeland. Blanca Peak should be thought of as the ‘north arrow’ on a map, which determines the orientation of a person’s mind and physical presence on earth. (http://navajopeople.org/blog/mount-blanca-sisnaajini-navajo-sacred-mountain/)

About Trinidad State Junior College – Valley Campus:
The Valley Campus of Trinidad State is located in downtown Alamosa. This branch of the school is a commuter campus of approximately 600 students, that features friendly staff and small class sizes. Hands-on programs include Nursing, Massage, Auto and Diesel Mechanics and Welding.  This campus also has an excellent Aquaculture program where students can learn how to run a fish hatchery. The Law Enforcement Academy and Auto Mechanics programs operate training sites at off campus locations. Students can also take a variety of courses offered in traditional classrooms including Business, Chemistry and Math. The Valley campus is unique in that the average age of students is late 20s. This non-traditional student population consists of students who are “starting over” and re-defining their career. At 7,600 feet in elevation, Alamosa sits in the middle of the San Luis Valley, the highest and largest mountain desert in the world. To the west are the majestic San Juan Mountains and to the east rises the rugged Sangre de Cristo Range. Great Sand Dunes National Park is located 35 miles to the north east and features the tallest dunes in North America. (From the announcement on callforentry.org)

My thanks to Trinidad State Junior College and the Colorado Creative Industries!

This entry was posted in Events, What's New?.