The Value of Studies: Process for “The Space Between”

This painting began on an autumn afternoon in the Conejos Canyon in south-central Colorado. During the previous weekend as I drove home from Denver through the mountains, the roads were overrun with leaf-peepers. However, in this part of Colorado, no matter how beautiful the fall colors are they can be experienced in relative solitude.

So there I was, completely alone, eating an apple and watching the sun go behind a ridge. Or, more accurately, I watched colors on cottonwoods and water change as the light lowered.

The drive to get there was a spectacle of aspen on the mountainsides, stunning and beautiful, but my artist’s eye was drawn to this scene — serene yet slightly electrified by the warmth of autumn colors in filtered light. During these quiet moments in nature, I’ve always had the feeling that the trees are talking to each other, and I make an attempt at eavesdropping. It turns out that I’m not the only one who feels this way. Yesterday I learned of this book titled, “The Hidden Life of Trees: What They Feel, How They Communicate — Discoveries From a Secret World,” by Peter Wohlleben, a German writer and forest ranger. I haven’t read it yet, but it’s next on the list! Regardless of the science behind plant communication, as a landscape painter, when I am really making art, a genuine connection occurs between my subject and myself. It’s my job to translate that communication onto the paper or canvas.

Reference photos are not always an accurate depiction of the feeling I had on the spot so I often do studies to find the visual equivalent. In this case, I deviated quite a lot from the photo in order to emphasize the personality of the trees and their place in this environment. I had in mind that the trees would have something like a stage lighting, as if this is a scene from an ongoing play they perform day after day. We might be aware of extra “cast members” in the background but they don’t have speaking roles.

In order to test this stage setting idea, I needed to find out just how much information (detail) could be deleted while still bringing the sense of a real place to the viewer. Oil pastels on black paper is one way to allow a scene to emerge from dark to light. It also restricts detail and requires a fair amount of spontaneity and looseness. The directness of drawing with color brought me out of the photo and back to my personal experience with the trees, something more unconscious and less tangible which I could bring into the final painting. The reference became a jumping off point rather than something to stick with and remain loyal to. 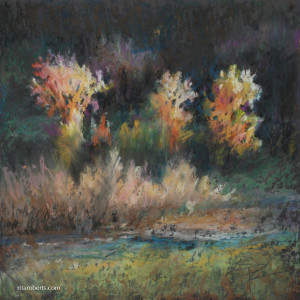 Next, I tried a tiny oil study with a palette knife. Painting small can also let me know how little information is needed to still be readable. Now I had three sources (four if you count my initial experience) from which to paint. 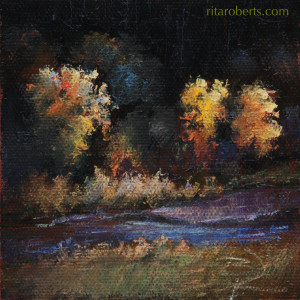 Each technique calls on a different visual language. The goal is to enrich the final painting and hopefully this makes the full conversation accessible to each viewer.