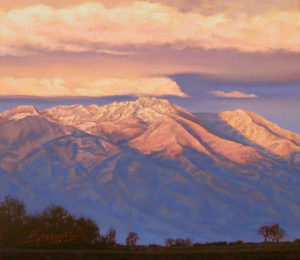 I was recently contacted by a someone who grew up in the San Luis Valley but now lives in Utah. He misses the landscape of his home and nothing says SLV more than Mount Blanca. He found me and this painting in a Google search. This piece is in the permanent collection of Trinidad State Junior College – Alamosa Campus so I had this print made for him. Now it’s available to all.

(from Wikipedia)
Blanca Peak is known to the Navajo people as the Sacred Mountain of the East: Sisnaajiní[8] (or Tsisnaasjiní[9]), the Dawn or White Shell Mountain. The mountain is considered to be the eastern boundary of the Dinetah, the traditional Navajo homeland. It is associated with the color white, and is said to be covered in daylight and dawn and fastened to the ground with lightning. It is gendered male.[8]

Summitpost notes that “the first recorded ascent of Blanca by the Wheeler Survey was recorded on August 14, 1874, but to their surprise they found evidence of a stone structure possibly built by Ute Indians or wandering Spaniards.”[10]