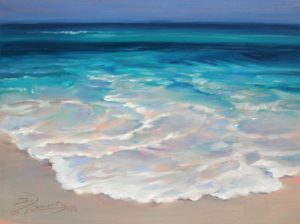 I spent January exploring the most fabulous 1.5 square miles, walking beaches instead of shoveling record snowfall in Colorado.
Green Turtle Cay is one of the barrier islands off mainland Great Abaco The Bahamas. It is considered part of the “Abaco Out Islands” and is 3 miles long and ½ mile wide. It was named after the once abundant green turtles that inhabited the area. Wikipedia

A wonderfully generous painting student has a house on White Sound. She and her husband offered me the use of their house for a month after taking my course. (Understanding Clouds) That course is no longer offered through Artist’s Network University, so I’ll be making it available through my own website later this year. Yes, this was an online course, so I had never met my hosts in person until two planes and a ferry brought me to their dock. It pays to have a good sense of people and I feel that this whole adventure is a natural outcome of teaching with a desire to inspire creativity and take artistic risks. Learning to paint better is a byproduct.

While on the island, I used the solitude to work on a first draft of a new screenplay. ( ritadoyleroberts.com ) Now that the story is nearly ready to send out, I am happy to be painting again…. but I do miss those beautiful beaches.

The Colorado Creative Industries Division of the Office of Economic Development and International Trade (CCI), has awarded me with a Career Advancement grant. The grant is to be used toward developing, publishing and marketing my Children’s Picture Book, Augustina, as well as a screenplay for animated film to accompany the book.

She’s making progress toward being available in bookstores! 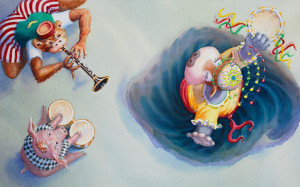 Augustina, is a humorous story about a lovable, barnyard oddball who dances her way into the carnival spotlight, and discovers her true identity — she is a heifer-potamus!

“I see all kinds of application potential, everything from children who are adopted to helping children gain ego strength.” — Carol C., Clinical Social Worker

To capitalize on attending conferences and industry workshops I am simultaneously developing an additional story for both book and film. Hint: the characters are perfect for cute Halloween costumes in coming years. Stay tuned! 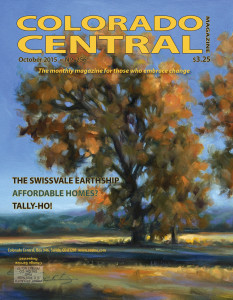 A single, windblown tree
on a grassy plain,
stunted by gales of critical air.

Sliced, ended. A dagger of low light
across a flatland glade,
browsed bare.

My soul awaits a cleansing rain.

freckles turned to buckshot
from her double-barreled cross

baby, upon boy, over unsuspecting man
planting damage, within defect, after birth

waxy tears drip on five cakes a year, now six
lit up on the 4th of July, bottles but no rockets

holiday turkey frozen solid
while she thaws in detox

invisible fallout explained away, forgiven
by the polyester / cotton blend of accountant-turned-therapist

salvation and escapes lie, lurking
in shadows behind the offering

Clunky shoes crunch a dormant lawn.  Selma bends, her heavy bosoms rest momentarily on her thighs as she reaches for the small roll of daily news.  Frost remains on short stalks of grass, like white whiskers on an old man’s chin.

A sudden gust blows secondhand snow from the oak’s bare branches. “It’s a little early for you, isn’t it Clyde, or were you out all night?” Selma licks her lips.    Snowflakes on the lips have no smell, but white whiskers do; pipe tobacco, pickled cucumbers, and the sour ferment of endless rebuke.

Clyde replaces his hat. “We were in the neighborhood. Harold’s been gone for a while now… maybe you’d like some company.” Clyde’s scraggly dog pushes through the gate.

Selma folds her arms. “Maybe I’d like to cook breakfast for you, is that it?” The mutt sniffs the hem of Selma’s housecoat. Its muzzle is white with age or frost, she can’t tell which.  Selma swats him with her newspaper.

“Aw, come on,” Clyde tugs at her sleeve, wool sweater over quilted robe. “You never minded before.” Selma snatches her arm away. Clyde rubs his chapped hands together. “The least you could do is invite us in to warm up. A cup of coffee maybe?”

Selma pulls a box of matches from her pocket. Clydes’s eyebrows raise as she makes a torch of the newspaper. “Here,” she offers, “warm yourself with this.” Selma tramps around the house. Clyde is left in the yard with a new snowfall and a handful of burning words.

Selma stomps her shoes at the back door. Inside small, bare toes wriggle on the kitchen linoleum.  Pearl rubs her eyes.  “Grandma, where were you?”

“Stray dogs,” Selma explains, “a couple of pathetic old hounds. I shooed them off.”

Pearl swirls her nightgown in a twirl.  “I already decided, I’m going to build snowman today. We have to find a hat for him.”  Selma nods, “You can use one of Grandpa’s old hats and his pipe too.”  Pearls halts her twirling, “But he never let me use his stuff.” Selma shrugs a smile. “Well, he’s not here to protest, is he?”

The metal gate squeaks and Pearl holds back the curtain.  “Grandma, who plays baseball in winter?”  Selma wipes her hands on a dingy apron, then stoops to see out the window.
Clyde scowls and takes a batter’s stance next to the snowman.  “Hey!  What’s he doing?” Pearl’s innocent outrage wants to know.  “Hush now.  Come away from the window,” Selma hustles Pearl to the kitchen, guiding her by the shoulders.  “Yeah, but….”  Pearl protests.  Selma grips a little harder, “It’s just a snowman and some drunkard down on his luck.  Isn’t it nice that you built a man of snow, just for that good-for-nothing to beat up and feel better?  You’re such a thoughtful girl.”

“Oh, you knew.  Somewhere inside you already had an idea that somebody needed that snowman.”

Pearl runs back to see remnants of the shattered head glittering downward like a quiet blizzard. Its black hat rocks slowly on a low branch. Clyde sticks out his tongue to catch some of the glistening crystals.  He leans a little too far back, teeters. The wooden bat makes a surprisingly loud crack when it hits the icy sidewalk.  His dog lifts its leg, turning the round base of the snowman yellow.

Clyde snatches the pipe from where it landed atop the mail box. He grips it in his teeth, grinning. The old sot wobbles. He nods with great satisfaction at the headless snowman, then stumbles away.

Pearl skips to the kitchen.  Saddle shoes on a wooden floor thump a heartbeat rhythm.  “You were right Grandma!  That man left happy.  I guess he needed a pipe too.”

Selma pulls the girl over to her hip in a one-armed hug. “You’re a blessing to everyone, whether they know it or not.” She lights a match with her free hand. “Let’s have cocoa with our soup.” The stove top ticks, till the burner ignites into a blue ring of tiny flames.